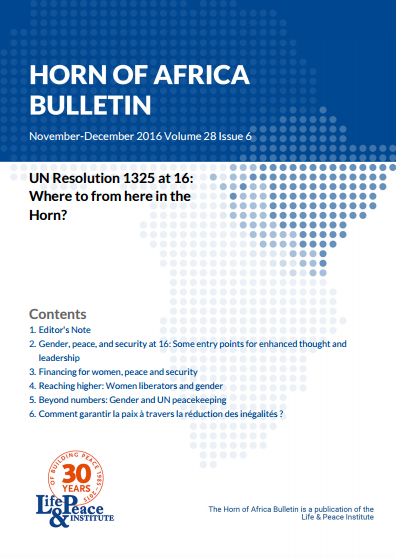 I have recently written an academic article titled “Reaching Higher: Women Liberators and Gender” which was published in the Horn of Africa Bulletin of the Life & Peace Institute in Uppsala (November-December 2016 Vol. 28, Issue 6).

National Action Plans (NAPs) and Regional Action Plans (RAPs) on Women, Peace, and Security (WPS) are useful guides and advocacy tools for the implementation of UN Security Council Resolutions (UNSCR) 1325 on WPS and UNSCR 1820 on sexual violence against civilians and armed conflict, for both state actors and civil society organizations. However, such documents have been slow on bringing about the desired social change. This is even more problematic for countries that have yet to develop NAPs. In the Horn of Africa[1], only three out of the eight members of the Intergovernmental Authority on Development (IGAD) have NAPs on WPS, two of which were adopted in 2016, 16 years after the adoption of UNSCR 1325. To promote the WPS agenda in the Horn, IGAD adopted the IGAD Regional Action Plan (IGAD-RAP) for 2011-2015 to implement UNSCRs 1325 and 1820[2].

The aim of this paper is to call on WPS activists, as well as feminists in the Horn, to reach higher than NAPs by challenging the discourse that women are solely victims of conflict, and emphasise women’s agency in peace and state-building. Moreover, all actors should pay due consideration to gender-just peace and transitional justice. By doing so, a critical feminist engagement with UNSCR 1325 and 1820 should argue that the political participation emphasised in the IGAD-RAP has become conflated with agency[3]. Governments of the Horn must ensure space for women to engage in peace-building while also considering their needs and representation in processes of transitional justice by acknowledging the role women have played in national liberation, reconstruction, and state-building processes.

The full article can be found HERE.

The full issue of the Horn of Africa Bulletin can be found HERE.